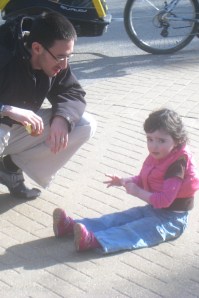 Someone once told me that “life is a series of negotiations”.  Since I have married and had children, this has become more and more apparent!

Children naturally use a whole variety of negotiation skills.  One i want to pick out based on today is throwing a tantrum…

We have all experienced, either as parents or spectators, the wonder that is a full-blown child’s tantrum. In fact my mum claims the only reason I am able to sit here and write this blog is because my grandma stopped her leaving me in M&S when I was having a tantrum underneath the clothing racks at three years old (I have always hated shopping!)

My daughter has thrown some phenomenal tantrums in her 4 years so far.  In fact, even today we had screaming, shouting and storming off because i wouldn’t let her take her dress off to run around in the garden in just a vest. It was too cold!

But surely this is a negative behaviour that shouldn’t be replicated in the workplace? This was my first reaction but in reality, whilst people in the workplace do not generally lie on the floor kicking and screaming and having tantrums like children, many people do have tantrums in their own way.  Alex Ferguson, the Manchester United manager, has similar fiery traits to his reputation and is known to have thrown cups of tea and water bottles at his players.  One of the girls who works with me goes silent and moody when she is‘having a tantrum’ at work.

In reality, our reaction to both the thought of these tantrums and the reality is to try to avoid them.  However, with people we work for or those that work for us, they can’t be avoided and as a result we often give in, especially if the things we are giving away are rationalised as ‘little things’. In fact, we often give in before the negotiation has even happened.  For example, when we know that if we do X, our boss will ‘throw a tantrum’, we inevitably try and avoid doing X in the first place.

The trick could be to throw a couple of tantrums to demonstrate where the lines are drawn and then you will probably never need to throw one again! However, as managers we need to respond to this behaviour and develop our staff to prevent them throwing tantrums on a regular basis.

1 thought on “Are tantrums a negotiation technique?”